MAP grants help make college possible for nearly 140,000 Illinoisans annually. That matters a lot because by 2027, 70 percent of jobs will require a college credential.1

Indeed, by 2026, the number of jobs requiring a bachelor’s degree is expected to be 10 percent higher than it was in 2016, with 17 percent more jobs requiring a master’s degree and 13 percent more requiring a doctoral or professional degree than a decade earlier. Conversely, the growth rate for occupations not requiring postsecondary education will be slower than overall occupational growth. According to the Bureau of Labor Statistics’ list of the 30 fastest-growing occupations, 18 of those require more than a high school diploma.2 Yet only about 55% of working-age adults (25-64) in Illinois hold a two or four year college degree or high quality postsecondary certificate.3

More education not only leads to better and more diverse career prospects, financial stability and independence, but it has also been linked to longer life expectancy, better physical and mental health, lower incarceration rates, greater tolerance, higher voter turnout, and better prospects for the next generation.6 So by helping to give individuals the opportunities a college education can bring, MAP is an investment in our communities and in the future of our State.

“The average tuition at Illinois public four-year colleges, adjusted for inflation, increased 18% between 2008 and 2019.7 In 2002, MAP was able to meet the needs of all eligible applicants and fully covered average public university or community college tuition and fees. In the 2020-21 school year, MAP served almost 140,000 students. Of the almost 26,000 eligible students who were not offered an award, it is estimated that about 14,700 of those students would likely have used a MAP award to attend school were it not for insufficient funding.8 In the 2020-21 school year, the highest MAP award covered only 33% of average tuition and mandatory fees at public universities and 36% at community colleges.9 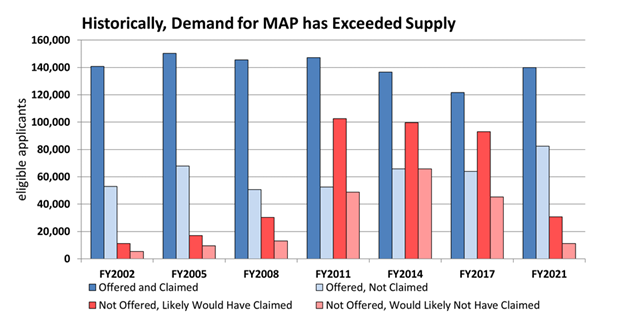 Note: ISAC calculates the number of students who would likely have accepted the award, had they been offered it, based on the previous year’s data on awards offered and awards accepted (claimed) by college sector.

It is estimated that in FY 22, MAP will be offered to most eligible students. This milestone reflects good and bad news: It is the combined result of more funding and the unfortunate fact that fewer students are choosing to attend college.

Certainly, the pandemic has had a negative impact on attendance nationwide. But the downward trend in postsecondary enrollment began long before the pandemic. Affordability is undoubtedly a factor, and with more funding, MAP can not only reach more students, but the size of awards can also be increased to better support the financial needs of students. Helping to address affordability will also help students and the state leverage federal Pell dollars. Even with an increase in the size of MAP awards, many students with financial need will need the combination of federal Pell Grant dollars and MAP to afford college. The combined funding must be enough to make college affordable. With a potentially significant increase in MAP funding, the state can make important strides in improving affordability.

MAP Matters – to today’s students, to the state, and to future generations. Let’s continue to work to make more MAP dollars available to students next fiscal year and beyond.


[1] Anthony Carnevale (founder and director of the Georgetown University Center on Education and the Workforce), Ignore the Hype, College is Worth it, Inside Higher Ed, February 23, 2020. https://www.insidehighered.com/views/2020/02/13/why-one-should-ignore-reports-and-commentary-question-value-college-degree-opinion

[4] See http://pellinstitute.org/downloads/publications-Indicators_of_Higher_Education_Equity_in_the_US_2021_Historical_Trend_Report.pdf (Equity Indicator 1A and 5A).

[6] Goals for the Common Good: Exploring the Impact of Education, Measure of America and United Way, 2016, http://ssrc-static.s3.amazonaws.com/moa/CGF_FINAL.pdf

[8] ISAC calculates the number of students who would likely have accepted the award, had they been offered it, based on the previous year’s data on awards offered and awards accepted (claimed) by students in each college sector. There are a number of reasons why a student might not claim an award they were offered, including not attending college at all, attending an out-of-state college, or attending a different college than was listed as first-choice on their financial aid application-- where they are not eligible for a MAP grant.

[9] Note that most MAP recipients also receive federal Pell grants, and Pell plus a MAP grant typically covers the current cost of tuition and mandatory fees at community colleges in Illinois.

Get the latest news & updates from ISAC